I just returned from a wonderful trip to London where, besides seeing many of the standard sites, such as the Tower of London and Big Ben, I went in search of all (well, some) things Will and Michelle. That is Will Sheridan and Michelle Loeser, the hero and heroine of my book Where There Is Will.

If you have read Where There Is Will, you know the story takes place in London. When I began writing, I was determined to get as much as I could right. I chose real coffee shops and pubs on real streets, Michelle and Will ate authentic foods using brand names available in the U.K., and I selected a flat for Michelle that was really available for rent within her price range.  I even described the flat just as I saw it in the photos accompanying the estate agency ad.

But in the end, for legal reasons, my publisher didn’t want me to use the names of real places, with the exception of well-known landmarks like those mentioned above. So I made up names for shops and restaurants, for food products, and so forth. That didn’t stop me from tracking down the real things when I was in London. I took photographs whenever possible too, and I’d like to share what I found.

I hoped no one in the capsule was watching me, wondering why I was taking in such long breaths and concentrating so hard on something they couldn’t see. But then again, I was standing next to a famous actor and having an anxiety attack. What were the chances no one was looking my way?

I heard Will say that this would be the best thirty minutes of the day, sending my heart into such frenzy I could have whipped an egg white in my chest. My knuckles turned white from gripping the railing. My face was undoubtedly the same shade. I made another attempt to fill my lungs. That’s when I felt a warm hand cover my own.

“Are you afraid of heights?” Will asked. “Now I remember how nervous you seemed on the aeroplane.

This is what caused it:

Two scenes take place in a pub called The Greenbriar. (For those local to Fairfax County, I named the pub after the neighborhood where my two older children went to school.) The real pub is The Blackfriar. As Will states in the book, “The building is awesome—art nouveau with reliefs made of copper and marble.”

It turns out the pub IS pretty awesome. See for yourself. 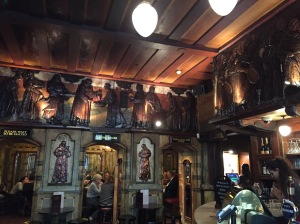 The Blackfriar, a Nicholsons Pub

When Harold takes Michelle to The Greenbriar after she and Will broke up, Michelle wonders, “What’s the harm?”

The answer came as soon as we were seated next to the table in the corner where Will and I had that awkward exchange in front of his cast mates when I first arrived in London. Throughout lunch, I pictured Will sitting on the same stool, knee bobbing and fingers tapping; his cast mates’ eyes upon me, waiting to hear if I said anything interesting to Will. 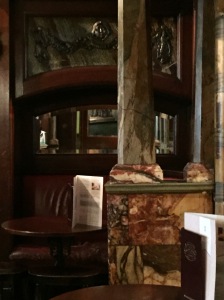 I had gotten particularly lost on my way to The Blackfriar, but I knew I had found it when I spotted a triangular-shaped building ahead of me. The pub was very similar to what I had envisioned from its description on the Internet except its size was a little smaller. And their Steak and Ale pie, which is what Michelle ordered when she was there with Harold, was just as delicious I thought it would be. I even sat two tables away from the corner table in the photo.

While I’m on the subject of food, about those malted milk balls Penny pops into her mouth after Amanda accuses her of voting “no” to the question, “Should Michelle sleep with Will?”

They were originally Malteasers.

Granny Bea presented me with a tin of assorted cookies from of one of London’s most famous department stores. “No English home should be without biscuits.”

No home should be without biscuits!

In the original draft I submitted to my publisher, Granny Bea doesn’t present Michelle with just any cookies, she presents her with custard creams from Marks and Spencer. I happened to pick up a package at the well-known department store.

I haven’t tried them yet, but they look like a standard vanilla sandwich cookie. However, I bet they taste great with a cuppa!

And a Will and Michelle hunt couldn’t be complete without searching for the book’s cover image. It turns out that I suspect their was some photoshop work done on the cover because I never found a vantage point that did not include the Tower of London. However, I did find some great views of the Tower Bridge, which is at the right of the photo. 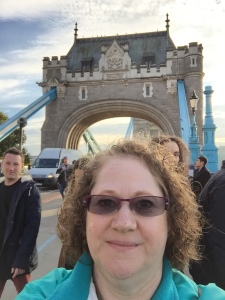 Me at the Tower Bridge 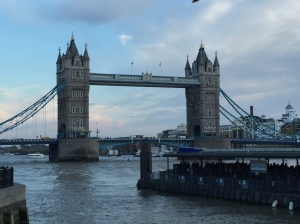 While on a walking tour of the City of London, I first spotted the modern building second from the left. One if its kinder nicknames is The Gherkin. Imagine how excited I was to recognize it.

My only Will and Michelle regret is that I could not locate a piece of banoffee pie.

With her hand on my shoulder, she nudged me down the hallway, her expression suggesting she held the secret to a long life. Our journey terminated in the office kitchen where a group was helping themselves to tea, coffee, cookies, and cakes.

“We do this every Wednesday,” Olivia explained. “A treat in the middle of week.” She sliced a piece of banana cream pie and offered it to me. “It’s an English favorite. Try it.”

Not one to pass up dessert, even if it wasn’t made from chocolate, I dug in. A burst of toffee erupted in my mouth. I was hooked. “What is this divine concoction?”

That made sense. Bananas and toffee. I could taste them both.

“Who’s responsible for the banoffee pie?” Olivia asked the others.

A woman who looked like she had eaten her fair share of pies in her lifetime raised her hand.

“Michelle’s from America,” Olivia explained. “She’s never had it.”

“You’ll need to convert the ingredients from grams, you know,” Olivia said.

Even the flippant edge to her voice wouldn’t deter me from wanting to work for a company that served dessert once a week.

I’ll be making my own banoffee pie for our once-a-year eating frenzy at work. It might not be weekly like tea time at Wynware, but it saves me quite a few calories!

I hope you enjoyed this little trip down Will and Michelle Memory Lane as much as I did. And if you haven’t read Where There Is Will, maybe this is just the enticement you need.